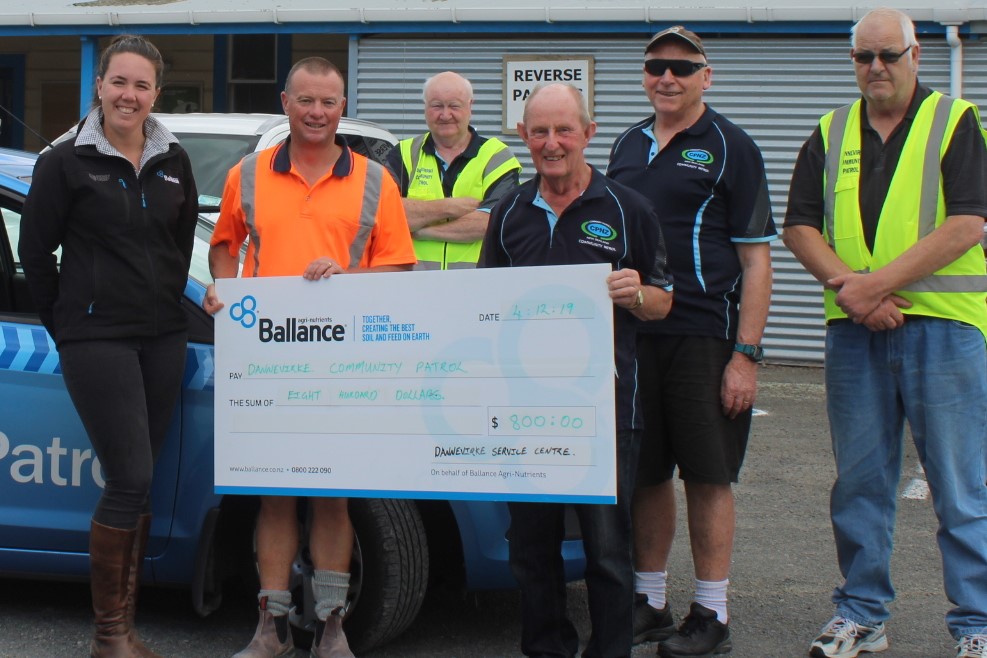 A big cheque for $800 was presented to Murray Lawson President of the Dannevirke Community Patrol by Ali Lochead Nutrient Specialist for Ballance Agri-Nutrients at the Dannevirke branch on Wednesday December 4.

Each year a branch of Ballance Agri-nutrients has the opportunity to return some money back to the community to show the company’s appreciation for the community’s support. Last time the recipient was the Health Shuttle and this year it is the Community Patrol. This is very timely because the Patrol is expanding its role.

Dannevirke Community Patrol (DVCP) has continued in 2019 to consolidate its role in support of the Police in their efforts to create a safer community in Dannevirke and surrounding districts.

Currently more than 30 volunteers are involved with the local community patrol in rostered day and night time duties which include both foot and vehicle patrols. In the year ending May 2019, Dannevirke patrollers completed close to 1700 voluntary patrol hours and covered more than 12,000 vehicle patrol kilometres.

Members have all completed the mandatory modules of training required of all patrollers under the guidance of Training Officer Faye Carroll.

Dannevirke Community Patrollers have this year also been actively involved alongside the police in the designated local Arms Buy-back days, and have worked closely in liaison with Charlie Timu and the Ruahine Maori Wardens at different events and occasions where assistance with people and traffic management have been required.

Patrollers were also integrally involved with the Community Connect neighbourhood sausage sizzles over the months of January and February last summer, an initiative undertaken alongside Dannevirke Lions, Ruahine Maori Wardens, the Community Board, Tararua Civil defence, the Fire and Rescue Service and the Police. This was a well-received initiative in Dannevirke, consolidating the message that “more connected neighbourhoods create safer communities.”

Patrol President Murray Lawson says “the patrol is always very appreciative of any donations from the community to support this voluntary service and today it extends our sincere thanks to Balance Agri-nutrients and especially to their local manager, Terry Walker, for the generous donation of $800.”

The Dannevirke Community Patrol is always interested to talk to local people who might be interested in serving our community by joining this volunteer group. If so, make contact with either the President Murray Lawson on 027 2862 024 or register your name at the Police Station.