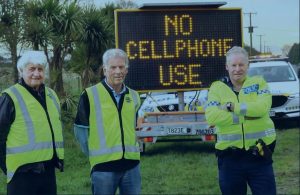 While it is now illegal to use a cellphone while driving, we all see the person in the car next to us texting or using social media at a stop sign.

The Canterbury Policing District have taken the rising issue into their own hands with the help of some of the Rural Canterbury Community Patrol Groups; Selwyn, Malvern, Ashburton and Rangiora. Starting in Selwyn, 24/7 digital signage trailers have been set up with large electronic signs saying ‘NO CELLPHONE USE” on rural roads to prevent crime and ensure road safety. The trailers are owned by Fulton Hogan, primary stakeholders.

The Patrols have aided the police by helping the police select the messages which would go on the signs – Selwyn Patrol decided to trial the signage using the “No Cellphone Use’ as Selwyn Police and Patrollers believed this was a more prominent issue. Senior Constable Williamson, of Selwyn Police believes “[cellphones] are a major distraction (and) cause a large amount of crashes”.

As of 2017, NZTA have reported distraction crashes have amounted to 40 deaths, 240 serious injuries and over 1000 minor injuries.

Murray Allison of SCP hopes at the very least, people will be more inclined to think twice before using their cellphones. He says,

see a number of vehicles where the driver was using their cellphone.”

Community Patrollers also helped to tow trailers to different sites with either the same message or completely different messages to help crime prevention in rural areas.