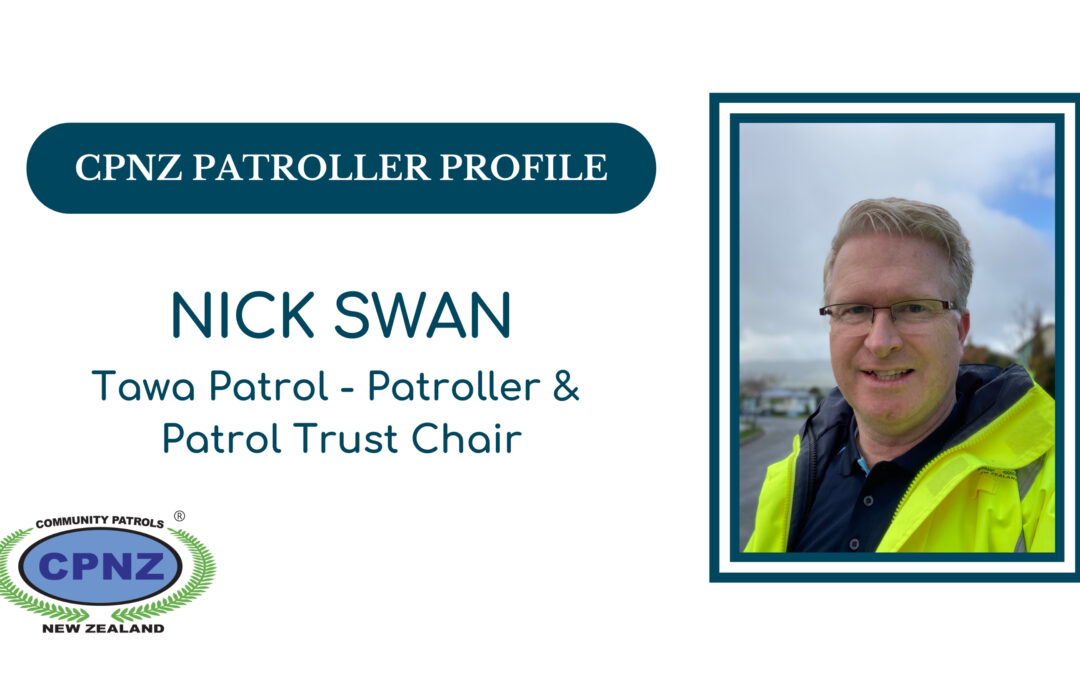 “I have been involved with the Community Patrol in Tawa for just over 7 years. My wife and I moved to Tawa from the Kapiti Coast in mid-2013 to be closer to work in Wellington. I had seen the CPNZ patrol car driving around one day and a short while later received a flyer for new Patrol volunteers. I had been looking for a way to integrate into my new community, meet new people and also contribute to the safety and wellbeing of Tawa by volunteering. The patrol seemed like the ideal opportunity to get involved and make a difference.

My previous professional and volunteer experience has included publishing, coaching, school trusteeship, fundraising for schools and incorporated societies, governance and committee membership. All these skills have been dusted off and utilised in various roles I have held within Tawa CP since 2014.

As well as patrolling monthly, I began producing the monthly e-newsletter for our 40-odd patrollers as well as a quarterly e-newsletter for patrol supporters. I stepped up into a fundraising project role when our patrol vehicle was due to be replaced. A combination of well coordinated grant applications were very successful, and we were able to purchase a brand new patrol vehicle and provision it with everything we needed to patrol.

Further successful fundraising projects I’ve led have enabled us to replace high-vis uniform items and fund first aid training for the entire patrol. I have been involved on an ongoing basis with our patrol operations committee – the group responsible for the day to day running of our patrol – and more recently appointed as a trustee of our charitable trust that provides governance and funding to the operations committee. I’m currently the trust chairman, so now trying to exercise a bit more oversight and longer term thinking.

I have been employed in the Communications Centre at Wellington Free Ambulance for almost 5 years, as a call-taking supervisor and relief team manager. It was my involvement with community patrolling that inspired me to pursue this line of work when a lengthy career in newspaper publishing became less fulfilling, and I’ve never looked back.

I joined Tawa Community Patrol to make a difference in the community and am very proud of the committed team we have assembled who work hard week after week to be the ‘eyes and ears’ keeping our community safe, helped by tremendous support from Police and CPNZ.”