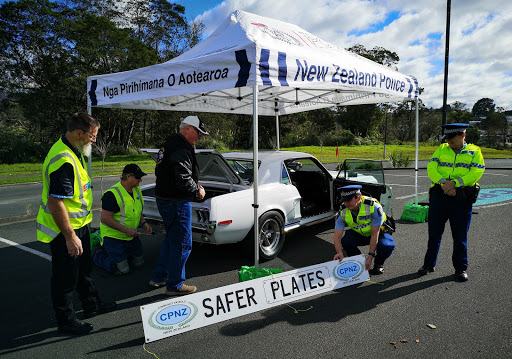 Whangarei Police and Community Patrol (CPNZ) Patrol members joined together at a fundraising BBQ outside Bunnings, Whangarei to inform locals about the importance of ‘Safer Plates’ on the 31st of August 2019. 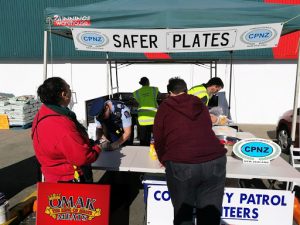 prevention. Patrollers replace the regular screws on the number plates of cars with tamper resistant screws. The aim of the event is to reduce the number of stolen registration plates that are used by criminals for petrol station drive-offs, stolen vehicles, burglaries, joyriding and more.

“NZ Police are very supportive of this prevention initiative… [as]… explaining to a Police [officer] that you were not at a crime scene or should not have to pay a speed camera ticket can be a hassle”  – Simon Lee Johnson, Whangarei Community Patrol.

Two officers from the Police Area Prevention Team joined the Whangarei Patrollers to help with promoting public awareness of car thieves and the consequences of stolen license plates.

“Methods where number plates can be made harder to  steal makes our job easier… [as]…. without that stolen number plate, the risk of detection increases for the offender.”  – Sergeant James Calvert, Whangarei Police.

The processing of the vehicles is done relatively quickly and effortlessly as they are held in large car parks with a trained team of installers to ensure that strict safety procedures are followed and customer waiting times are reduced. The plates are installed for a nominal donation of $5 to complete the installation.

Along with the installation of the safer plates, ‘TXC’ deterrent window cards were also given to shoppers. The purpose of these cards is to announce to thieves that there are no valuables in the vehicles and that it would not

be worth breaking in to. The bright yellow DL sized cards are printed on stiff 350gm cards which are highly visible and should be inserted inside the drivers side window. The cards were very popular among the public as people grasped their purpose and were conscientious enough to remove their valuables from sight. This initiative has already proved itself in Auckland with measurable reductions in theft from vehicles.

The event was hugely successful as the Whangarei Community Patrol sold 300 sausages and processed over 60 cars. Proceeds from the sausage sale went towards the replacement and maintenance of patrol vehicles to align the Whangarei patrols with national CPNZ standards. Effectively, this helps with the overall image of CPNZ and helps us become more recognised within our communities.

“Regardless of funds raised on the day, we always come away from Safer Plates events feeling very positive [as] the public engagement is enthusiastically supportive, and we usually get quite a few membership enquiries” – Simon Lee Johnson, Whangarei CP.

“I see CPNZ as a key Police partner to achieve our goal of having ‘The Safest Country’. As well as their normal activities and regular patrols they have assisted me in crime prevention operations in our high risk burglary areas, knocking on doors and offering prevention advice before the offence happens.” – Sergeant James Calvert, Whangarei Police.